It’s always interesting to see how different teams fare against a certain caliber of opponent, from the leagues best to the not so good. When taking a look at hardpoint, the most played respawn and usually most played mode in general, it gives a good insight into how a team is doing. Below is a table showing every teams hardpoint record along with their records against different categories of opponents. 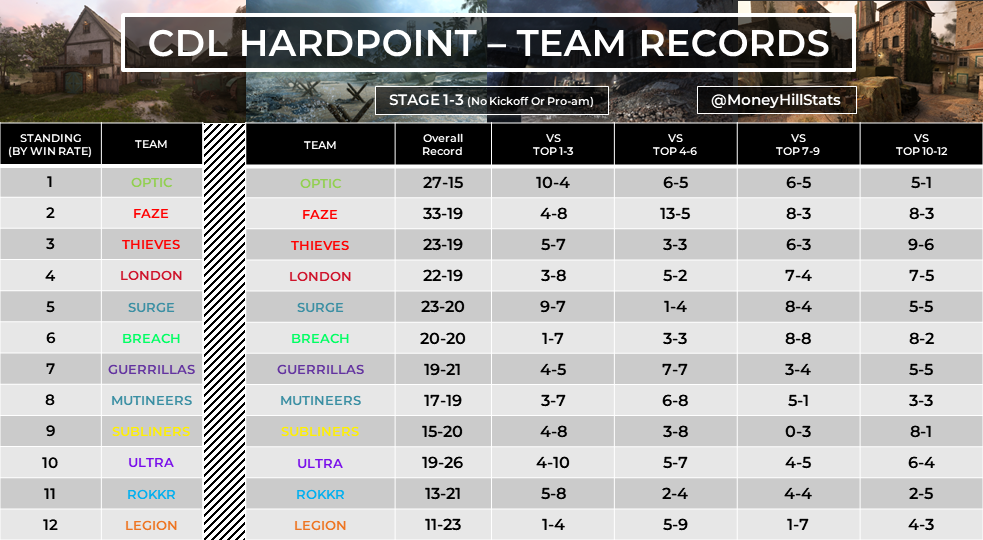 Using the team standings on the left, based on their hardpoint win rate, I have grouped them into 4 categories. Then simply taking their map records against all teams within a said category. If a team is within the category they are being matched up against, it only takes the record against the 2 remaining teams.

Beginning with Optic Texas, their record against the top teams is rather strong, usually being able to take down the likes of Faze and Thieves. Somewhat surprisingly is their average record from teams between 4-9, where they only have a 12-10 record.

Atlanta Faze have an extremely dominate record against everyone bar Optic and Thieves, especially Optic who have been a thorn in FaZe’s side all season. But besides that, it is as you were for the Atlanta boys, boasting a very impressive 29-11 record against all remaining teams.

The L.A Thieves end the A Tier with a 23-19 overall Hardpoint record. The compete hard against the top two teams (5-7 record vs ATL & TX), while having a 15-9 record against the bottom 6 teams in the League. However it is interesting to see that thieves only have a 3-3 record against that middle pack of teams which is a strong parallel to their overall season.

For the likes of London Royal Ravens, they have similar stats to the L.A Thieves. Both struggle against the top teams, London more so. With the remaining 3 groups of opponents producing positive records. The Ravens have struggled in Hardpoint with Harry “Harry” Payne in the lineup, finishing with a 3-8 record during Stage 3. Will they regain form with Joey “Gismo” Owen now back in the lineup? We shall see in Stage 4!

Seattle Surge have a very interesting set of records. A very respectable 9-7 against the top 3 coupled with a rather poor 5-5 against the bottom 3 sums their season up perfectly. They are doing the hard bit, but cannot find the consistently to beat teams they theoretically should.

Boston Breach’s records are a perfect way to see how their season is going. Very strong against the bottom teams, but get dominated by the top. This probably places them in a deserved 6th overall spot and at even 20-20 record.

Florida Mutineers and LA Guerrillas have almost the as you would expect records. Guerrillas being a very 50/50 team. Mutineers interestingly have seen those 3 wins against the top 3 all come against Optic, with 0-2 records against both Faze and Thieves.

NYSL had a start of the season to forget, but having turned their hardpoint woes around, their records while disappointing at first, are very impressive when you consider where they came from going from 0-13 to 15-20 overall. A special mention to their 8-1 record against the bottom 3 teams, a league best.

The Toronto Ultra and Minnesota Rokkr boast similar records, both quite poor, especially Rokkr’s record against Ultra and Legion, the only team in the league to have a negative record against the Leagues lowest performing hardpoint teams.

The Ultra have found success on two maps in recently Stage 3. They finished the stage with a 4-3 record on BoCage and 5-2 record on Tuscan. The Rokkr have also found success as of late, having positive records on BoCage (3-2), Gavutu (2-1), and Tuscan (2-0) during Stage 3.

As for Paris legion, it’s really as you would expect, besides that positive record against Ultra and Rokkr. They’ve pretty much had a season to forget so far. The have a 11-23 record this season with their only map with a positive record being Gavutu (2-1).

It’s always nice to see how teams fare against different levels of teams and like I’ve said before, a good way to see how a teams season has shaped up. Always producing surprises though, with Surge’s 5-5 record against the bottom 3 teams, or Rokkr’s negative record against those teams too. Breach’s league worst 1-7 against the top 3 or Optic’s super impressive 10-4 record.